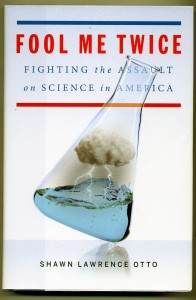 Acknowledgment: while I have the book, I just purchased it a few hours ago and obviously have not read it myself. I have read random portions. But the accolades the book has already received, including the effusive and lengthy introduction of Mr. Otto by long time Twin Cities media personality Don Shelby this evening, help to move me to pay especially close attention to its contents. This is a serious book about a serious topic recommended by serious people.
There appeared to be well over 100 of us in a packed room at Minneapolis’ Loft Literary Center this evening.
More details on the book are here.
Being that this book encroaches on politics, always a dangerous area these days, there are negative reviews along with the positive at places like Amazon, but they don’t destroy the authors basic premise that science, the source of so much that has been helpful in this society of ours, is now under assault, and if the assault is successful, our society as we know it is in deep trouble. (About those negative reviews: I’ve recently learned that ideologues seek to undermine books that they deem in opposition without even bothering to read the book. This is very simple to do on line. I’m pretty sure this dynamic will be in place in some reviews of this volume.)
Indeed, challenging politicians and the major media to again start seeing Science seems to be a major reason for this book. Science is under attack and despite its long and proud history and increasing relevance, it is derided by politicians or political candidates; or its revelations avoided by them. To embrace even well-settled science these days is politically very risky. Fool Me Twice covers a great deal of ground in what random segments portray as being very readable and easily understood, and I predict it will become a basic text for becoming grounded in the issues and the arguments – on both sides – of this contentious debate.
Waiting for the authors talk to commence I read a segment which he later emphasized in his own presentation: “In late 2007, the League of Conservation Voters analyzed the questions asked of the then candidates for president by five top prime-time TV journalists…By January 25, 2008, these journalists had conducted 171 interviews with the candidates. of the 2,975 questions they asked, how many might one suppose mentioned the words “climate change” or “global warming”? Six. To put that in perspective, three questions mentioned UFOs.”

As I listened, I couldn’t help but think of the rather bizarre intersection we Americans have reached in this time in history: at the same time in history that science is positioned to make a huge and positive difference for everyone; there is active advocacy for going back to the dark ages where belief trumps reason. Examples are easy to find.
But the message will be in the heavily footnoted 376 page document. And as Beny Bova, award-winning author and Fellow of the American Association for the Advancement of Science, says on the book jacket: “Before you vote in the next election, read Shawn Lawrence Otto’s Fool Me Twice.”
I’ll say no more till I’ve read the book, except to recommend a visit to an important associated website I learned about tonight: ScienceDebate.org . Check it out. It sounds most interesting.
Now to the book….
UPDATE October 25, 2011: Lori Sturdevant of the Minneapolis Star Tribune wrote this commentary on Otto/Fool Me Twice in today’s paper.