Two grandsons and I were enjoying a major league baseball game at Minnesota Twins Target Field on May 25. It was a perfect day for a ballgame at this new park, which is at the very edge of downtown Minneapolis. (click on photos to enlarge them) 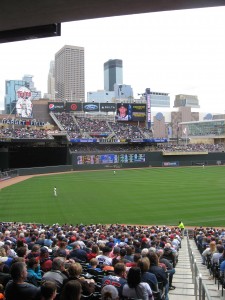 I couldn’t help but think that a few days earlier, perhaps three miles to my right, a disastrous tornado hit one of Minneapolis’ poorer neighborhoods* causing immense destruction, though nothing like the massive death and destruction in Joplin MO several hundred miles to the south.
I also got to thinking of a memorable tornado in North Dakota June 20, 1957. I was about to begin my senior year in high school that year, and we had just relocated to a town about 200 miles from Fargo. That storm had such an impact on me that I still have all of the newspaper clippings from the Fargo Forum from the day after that memorable storm. Fargo Tornado Jun 1957003 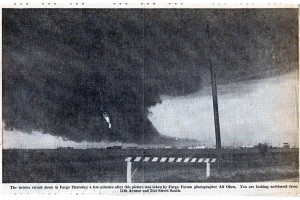 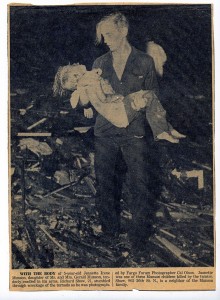 Storms came with the territory in ND and elsewhere in 1957. Out there on the prairie you could see the weather coming, and the prudent person had some kind of a storm cellar to retreat to just in case. I experienced one memorable close call in August, 1949: the roof of my grandparents barn blew off less than 100 yards from where we were sleeping late at night. Straight line winds were the problem; a shelter belt behind the house probably saved us from death.
We knew, then, that there was a tornado belt, its epicenter Oklahoma. We knew there had been a Dust Bowl, and where that had been, and when. We did have some history at our disposal.
I got to thinking of compare and contrast between 1957 and now: commonalities, differences.
1. WEATHER FORECASTING and COMMUNICATION about the weather was evolving but relatively unsophisticated then, unlike the nearly pinpoint accuracy of today’s forecasts. Now you can watch disaster developing. Then you were more likely caught by surprise.
2. Strong local COMMUNITY and GOVERNMENT existed as it does today*. But community was more isolated and independent then. It was still possible to imagine that your little space was the center of the universe and you could get along without others beyond your horizon. You were not immersed in a global system as we are today. Imagine being dropped, today, into a place without grocery stores and cars and such. For most of us in 2011, such a fate would be hell on earth. We are dependent on outside goods and services to an unfathomable degree. Local support systems are no longer enough.
3. In 1957, HUMAN INFLUENCED CLIMATE** CHANGE was not even the tiniest of concerns. People could remember the droughts of the Dirty Thirties, but hardly anyone thought (as they should have) of human impact on such phenomena. People, then, did not have to worry about denying reality. Now we do. Out of ordinary weather** incidents, as severe flooding, seem more frequent, and ordinary. 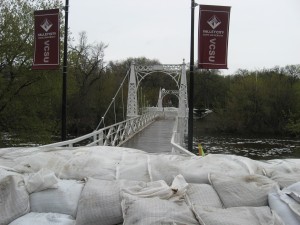 A new reality has taken shape: we humans, particularly in the industrialized countries, are a major cause in the matter of climate change…even if many deny such. (Here, and here for some recent opinions. The topic deserves both attention and action.)
4. I’m not sure how VISION impacted in 1957, nor how it compares with today’s looking at the future. What I do know is that in 1956, the Act which led to today’s U.S. Interstate Highway system was easily passed and funded by Congress through then-huge increases in gasoline taxes, whereas today’s political and even business decision making seem short on consideration of the greater good or the longer term. Things like those then new freeways of the late 1950s and 1960s are at the end of their lifespans and and the ubiquitous shelter belts planted in the 1930s and 1940s are dying, and there seems little interest or attention to their renewal. Too many of us have been convinced that short term wants count more than long term needs.
5. POLITICIANS (who accurately reflect our best and our worst attributes) do not make us look very good in the present day. They, particularly those in Congress, truly reflect us.
It’s never too late to change behaviors. We need to.
* – How could 30,000 of us be sitting in a stadium enjoying a baseball game when there was a disaster area just a few miles away? I’ve asked myself that question. We are a city of 3,000,000 people, and government was doing more than an adequate job organizing etc as we watched the game. That is why we have government. Had we all descended on the disaster area, it would have been chaos.
** – Succinctly, as I understand the terms, “Climate” is the long-term average condition; “Weather” is localized incidents. “Weather” and “Climate” are directly related, and their phenomena often deliberately confused. They really don’t care about human rhetoric or denial; they do depend on human behavior.
#
AN END NOTE: It is ordinary, these days, particularly in nostalgic e-mail forwards, to paint the 1950s as an idyllic time in our history. Early in 1950 I turned 10; early in 1960 I turned 20.
There is a great deal truly positive to say about the “Baby Boom” years of the 50s, like the Presidencies of Harry Truman and Dwight Eisenhower, but there are ample bumps in this road as well.
The 50s had hardly begun when the witchhunt for “Un-American” people began. At the Congressional level, it was the House Un-American Activities Committee; in the Senate, Senator Joe McCarthy. FBI Director J. Edgar Hoover was hardly a saint. A lot of damage was done. The 50s were the time of bomb shelters in school basements and backyards to protect against the certain Soviet attacks with ICBMs. Fear always sells well; it sold well, then.
I would suspect that African-Americans, Native Americans (“Indians”) and other people who were ‘different’ than we whites would have a slightly different view of these times than people of my race. The 50s were ‘back of the bus’ times for “Negroes”; and a time when the Indians always lost in “cowboys and Indians”.
Even Catholics and Lutherans didn’t get along well, then.
It is useful to reflect on what the 50s brought to us, good and bad, as we continue into the 21st Century.
https://thoughtstowardsabetterworld.org/wp-content/uploads/2022/04/thoughts-300x138-1.jpg 0 0 dickbernard https://thoughtstowardsabetterworld.org/wp-content/uploads/2022/04/thoughts-300x138-1.jpg dickbernard2011-05-26 20:26:252011-05-26 20:26:25#377 – Dick Bernard: The Fargo Tornado of June 20, 1957