On my father’s death in 1997, I became custodian of our family photos.
While he came from an ordinary North Dakota family of French-Canadian descent, the family had an inclination to take pictures documenting important events, such as weddings, new births and such.
Within the box of photos was a May 7, 1954 Social Security envelope, and inside the envelope were seven most unusual photographs, very dark, on varied size pieces of tin.
They were of a genre called “tin types“, photography as practiced before photographic film.
The oldest – I can speak with some certainty as to its ID – is a photo of my great grandparents, Octave Collette and Clotilde Blondeau, who married in St. Anthony (later Minneapolis MN) in July 1869. While the photo was, like the others, unlabelled, there is no question, comparing with later photos, that it showed Octave and Clotilde, likely about the time of their marriage. The photo is below.
(click on all photos to enlarge). 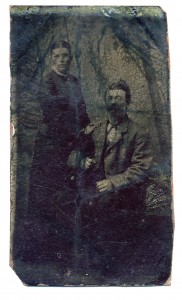 The remaining six photos are also unlabelled, but most of them show a young Henry Bernard (born 1872), and were likely taken in the late 1880s and early 1890s, probably in Quebec, most likely as keepsakes for him to take along on his trip west to remember the folks back home. The album with the remaining photos is at the end of this post.
The photos vary in size: the smallest is of Octave and Clotilde (1 7/8″ x 3 1/8″); the largest of the two men (2 5/8″ x 3 1/2″). As can be noted on the above photo, the tin pieces were probably snipped out, rather than of a standard consistent size.
The tintypes obviously endured plenty of wear over the years. It is remarkable that they survived as long as they did, probably stuck in a trunk or dresser or such for as much as over 140 years. But they were meaningful enough to not be thrown out.
Four of the photos appear to have been taken by the same photographer at the same time. The evidence is a slight rosy tint to portions of the photos (note the cheeks), likely hand administered. Until I scanned the photos (at 800 dpi), I wasn’t aware of these rosy cheeks etc. on the four photos.
Precisely the who, where, when and why of the photos will likely remain mysteries except for the certainty that most include my grandfather Henry, and the other is of his future wife’s – my grandmothers – parents.
My best guess: the large group photo, with a young Henry Bernard in front, is probably of his family circle in Quebec, including the Parish Priest. Ditto for the photo of three men and three women. And the others are similarly related, in some ways to his family in Quebec (or so I believe).
The four photos with the rose tint were probably taken at Thetford Mines, Quebec, where young Henry was a miner, where a sister and family lived, and from which place he most likely embarked for then-booming Grafton ND in the early 1890s.
Family history mysteries: they fascinate, and they exasperate.
Consider labeling your present day photos, so that someone down histories road knows who is in the image. 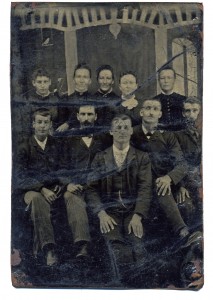 Most likely Henry (Honore) Bernard in front center, his brother Joseph to his left. Perhaps taken in Quebec in late 1880s. 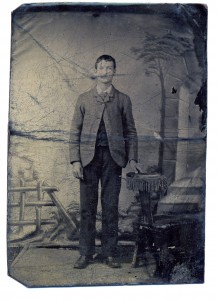 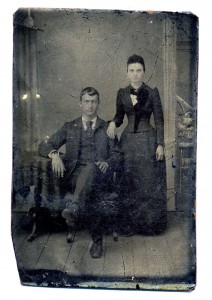 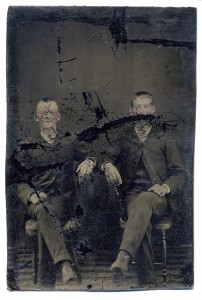 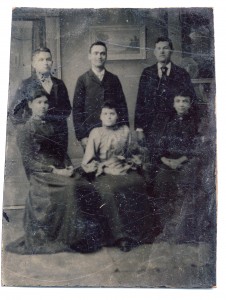 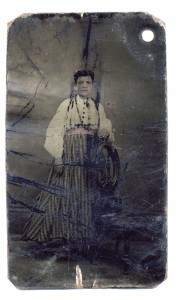