Yesterday, I attended my first funeral of the New Year. Tom was a member of one of my “families”: head usher for one of the other teams at 9:30 Mass. I did not know Tom well, but he was a good guy, and he was, as I say, “family”.
It was important to attend.
(click to enlarge) 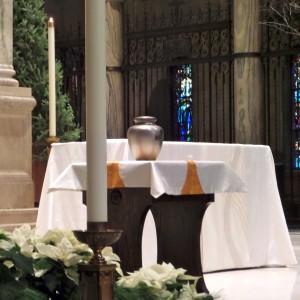 I am at the age where this kind of occasion will be common this year. Death will choose who, how and when…. There will be different names for the event, as “memorial service” or the like; and they will be in differing settings.
Tom was about eight years older than I am; most of the observances I’ve attended or acknowledged have been for persons younger than I am.
These events are really for the living, all of us heading for this destination, however we try to slow it down, or avoid it altogether, or be “forever young” as some TV ads promote.
We’re all on the same train, with the same destination – only at different times, perhaps different circumstances. “You can’t take it with you” comes to mind.
In Tom’s case, there were a goodly number of family and friends in attendance at the Church.
And the eulogies were, as they always seem to be, instructive to those sitting and listening; and entertaining too….
When it comes down to the last public appearance, attention seems drawn to the small things contributed by the deceased to the community, which usually centers, its seems, on “family”, a term with varying definitions.
Perhaps it is because I’ve rarely been to such services for the “high and mighty”, I don’t recall hearing tales at these events of acquiring great riches or “power” in some other context. Rather, more common is how this person or that was a contributor in some small way to the family circles of which he or she was part.
And, make no mistake, everyone has their story.
Some years ago, I came to be the representative of my brother-in-law, the unmarried last survivor of his family of origin. He and I were friends, though we lived over 300 miles apart and were in contact seldom. Ultimately his life went south; he lost his house, and then his mobility, and then lung cancer closed in for the kill…succeeding November 7, 2007, age 60.
Mike was a person who, in most of his adult life, would be considered the odd person in his town. He mused about where it would be best to be homeless. He had no friends, to my knowledge. I was about all he had.
When death circled ever closer, and Mike gave me power of attorney, I inquired of the local funeral home as to whether Mike had any final requests on file with them. They had handled his mothers funeral in 1999.
They sent me a brief letter from Mike, dated March 19, 2001, in which he said this: “…I have decided that I would like to be cremated. As for the ashes, maybe you could bury them between my mother and brother’s graves…As far as any funeral service, that would be nice. However, I doubt if I would have more than two or three people attending. I guess I am kind of a lone wolf….”
Mike got his wish, and he wasn’t far off in his prediction. As I recall there were about seven of us at graveside when his ashes were buried on a chilly afternoon near Thanksgiving 2007.
One of the seven at graveside was one of the teachers, now very elderly and frail, who Mike had had in high school (class of 1965). She made a point of complimenting him as a good student. Her biggest compliment to him was that she showed up on a very chilly late November day to recognize that he had lived.
A couple of weeks after his death, the residents at his final home, New Horizons Manor in Fargo, met to recognize his life. There were probably 30 or more in attendance, mostly elderly or severely disabled. Few knew him. He had lived there only a short while, to the end, a “lone wolf”.
But his was one of the most wonderful memorial services I have ever attended.
We are born and then we die.
In between is “life” and in the end, it seems to me, all that really matters are the small things, the things of supposedly no consequence, that are remembered at rituals of departure. 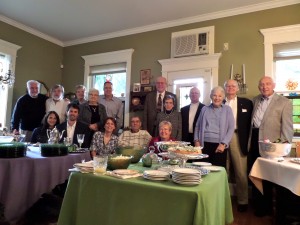 Friday evening my 88 year old Uncle and I went down the hall to visit his sister and my aunt in the Memory Care unit at the Nursing Home/Assisted Living facility in a small rural North Dakota community. It was a short trip, under a single roof. My Aunt, at 93, is most likely not suffering from severe dimentia, but nonetheless the placement is appropriate. She’s been in the unit for about a year.
My Uncle and I just went to visit. My Aunt was working on a puzzle. (photo at end.)
It was supper time, and two other ladies were at the same table, one familiar to me, the other not, perhaps a recent resident.
“Emma” was attempting to engage, but not succeeding. The second lady was easily understood but not allowing for much visiting.
We may have looked or sounded annoyed: at some point you don’t know what to do. Those knowing someone with any variation of dimentia understand.
The man assigned to evening duty came around. I’d talked with him during an earlier visit. He’s a retired teacher in the town, and as I recall, he willingly took his job more as a service than as a job. He had a relative – perhaps his Mom? – who was or had been a patient in this very facility. Maybe, it has since occurred to me, she was Emma….
For whatever reason, he entered the conversation: “Emma stood in front of me for 20 years in our Church choir”, he said. “She had a wonderful Soprano voice.” He mentioned one particular piece which required a phrase one octave higher than the usual, and it was Emma who would sing it, beautifully.
As I recall, Emma had nodded off.
Off he went to other duties, and our visit continued, helping my Aunt finish a puzzle (she’s good with puzzles) and then we left.
And all the next day, driving 300 miles back home, I kept thinking of that brief but powerful encounter in the Memory Care section of the Nursing Home.
This morning Cathy and I went to 9:30 Mass at Minneapolis’ Basilica of St. Mary as usual.
Fr. Greg Welch was celebrant and homilist, and today’s Gospel was Luke 18:9-14, the well known passage about the righteous Rich Man and the repentant Tax Collector (I knew is as the Pharissee and the Publican story).
Fr. Welch, in his own comments, chose to focus on the Pharisee, and drew us into the Pharisee’s circle, as it were, with a simple parable of his own.
He opened with a simple comment: when he was young, he grew up in a family that assumed the kids would go to college. There was no need to discuss this reality. For many other families, college is not even a dream, he said. It is not part of their reality for financial or other reasons.
Those of us in those pews are mostly pretty privileged, and Fr. Greg wondered aloud about the wisdom of a country criticizing “Obamacare” while 32 million people are without health care, and no alternative being offered; about cutting food stamps while considering military expenses to be essential; about people, including the homeless holding those cardboard signs on street corners, needing a job not being able to find one in which they can earn a living.
The open question, not directly addressed, was to each one of us: “where do YOU fit into this picture?”
It was an applause worthy homily; we in the pews were very, very quiet.
I’ll let the Memory Care attendant know about this blog post, and perhaps he will tell me what motivated him, on Friday night, to tell us about Emma, the lady whose grasp of what we take for granted is very limited.
At any rate, he sang a magnificent Soprano for us on Friday afternoon. It is a message that will stick with me.
(click to enlarge) 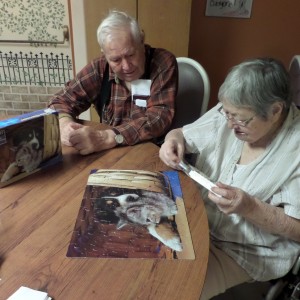 My Aunt and Uncle with the completed Puzzle, October 25, 2013

UPDATE Nov. 3, 2013:
Today’s Gospel was the story of “Zacchaeus, who was a chief tax collector and also a wealthy man” (Luke 19:1-10). Our Pastor, Father Bauer, gave an excellent homily interpreting the Bible story.
As with the previous Sundays text and interpretation, this Gospel fit into todays news, which included, this past week, the mandatory cut in “snap” funds at the federal level – I think they’re called food stamps.
There is a lot to talk about….
Also, this past week, came a review of what is likely a very forgettable book, by Bill O’Reilly, which essentially attaches the crucifixion of Jesus to taxes, and another “Christian” who labored mightily to prove that “government” is not “people”, when that is all that government ever is or has been….
It takes all manners of tortured interpretation. But the reality is, there are those of us who have, and we have an obligation those who have less.
Some day we may find ourselves in the same position of needing help.
https://thoughtstowardsabetterworld.org/wp-content/uploads/2022/04/thoughts-300x138-1.jpg 0 0 dickbernard https://thoughtstowardsabetterworld.org/wp-content/uploads/2022/04/thoughts-300x138-1.jpg dickbernard2013-10-27 14:51:442013-10-27 14:51:44#792 – Dick Bernard: The Gospel of the Soprano

Sunday morning at Basilica of St. Mary, Fr. Greg Miller chose to close his homily with an extended quote from Martin Luther King’s talk to the Southern Christian Leadership Conference 16 August 1967. Entitled “Where do we go from here?”, the text of the speech is here.
It is worth the time to read in its entirety.
As always, King’s words speak powerfully for themselves. They are old news, but they are as recent as today. Change comes slowly and is never easy.
Fr. Greg, ordained in 1973, he said, traced his ‘roots’ as a Catholic Priest to mentor Priests who were activist civil and human rights leaders in the 1960s and 1970s. This is how future comes from past. Had Fr. Greg not called attention to King’s talk, I likely would never have read it.
How can each of us apply Dr. Kings words today, 45 years later? He is gone. We are his legacy, the ones who need to do the heavy lifting. Read his words and decide where you fit in.
Less than a year after his talk, April 4, 1968, before he had reached age 40, Martin Luther King was dead at the hands of an assassin in Memphis, Tennessee.
But his dream lives on through all of us.
To help catch the dream – perhaps for the first time – I highly recommend a new film, just out on DVD and on demand. The film is I AM, the Documentary. You can read about it here. We saw it last spring, and it gives hope.