Last night we attended August Wilson’s play, Two Trains Running, at St. Paul’s Penumbra Theatre. It is a play first performed in the late 1980s, and set in the 1969 African-American community of the Hill District in Pittsburgh.
The Penumbra engagement runs through Sunday, October 30. (click on photo to enlarge) 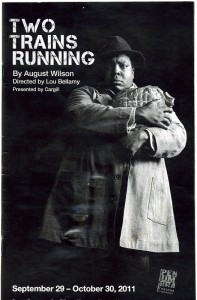 Two Trains Running is one of August Wilson’s ten now famed “Pittsburgh Cycle”, ten plays, one about each decade of the the Twentieth century, as experienced by African Americans. All but one of the plays is set in his home town of Pittsburgh.
I’ve seen eight of the ten, nearly all at Penumbra Theatre in St. Paul. Last nights performance was also at the Penumbra, the second time I’d seen the play there.
There is more than adequate internet information about the play accessible here. Other blog entries I’ve written about August Wilson are accessible here and here. Both include photos I took of his Pittsburgh in 1998.
August Wilson is now an American institution with two Pulitzer Prizes for his work.
Set simply in a down-at-the-heels restaurant in the Hill District, Two Trains Running has seven characters: the owner, the waitress, and five customers who, in two acts, eight scenes and three hours, comment very powerfully on the matter of personal stories, relationships and contemporary history.
It is a time of tension in the United States and particularly in the African-American community. Pittsburgh’s Hill District is being killed to be reborn through urban-renewal; Malcolm X, though dead some years, lives on in demonstrations occurring somewhere in the city. There remain “two trains running” from Pittsburgh to Jackson, Mississippi, home to the Restaurant owner till the violence of racism drove him north years earlier; bitter personal experiences he could not leave behind.
Into, and out of the Restaurant come the characters who make up its regulars. All are simple yet immensely powerful representatives of lives in the neighborhood. They include the local numbers runner; an ex-con not long out of the penitentiary; a sage elder; a demented street person; a wealthy mortician; the waitress and the owner. They speak their voices; their relationships ebb, flow, ebb again…. They speak “family”, though none are related in the legal sense of that term.
Off-stage, a local prophet, laid out in a casket at the morticians funeral home, draws unseen mourners; a woman, said to be 322 years old, dispenses advice to troubled souls, as might a muse.
We sat in the front row, feet against the stage. We were in that restaurant, and within those characters lives….
It was near 20 years ago when I first saw Two Trains Running at the Penumbra, so it was a new yet old experience last night.
Though there was no way for me, a white man from a country upbringing in North Dakota, to directly identify with the experiences of those in that Pittsburgh restaurant, it was simple enough to see how lives, even of strangers, interact, come together, drift apart.
We may pretend that we can isolate ourselves from others, but we are all family in one way or another. I can only speculate about what August Wilson was saying to us through his characters. His mortician, wealthy because of others deaths, important because of his wealth, would some day die himself, unable to take his wealth along for the ride. Polar opposite, the street person with the grocery cart, obsessed with the ham he’d been promised but never received, probably was every man – each of us.
Last night, Mr. Wilson worked his magic for me once again.
We’ve come a long way since August Wilson’s Pittsburgh, 1969.
Or have we, really?
Maybe when August Wilson was writing his play in one or other restaurant back in the 1980s, he had in mind the 99% vs the 1%. Who knows?
In Two Trains Running there were demonstrators in the streets; there was no work; there was great inequality between those who have, and those who have not.
The message was, in too many ways, spoke to today.

On check-in at my hotel in downtown Pittsburgh, I asked if the August Wilson Center (AWC) was somewhere in the neighborhood.
That was an easy question: it was three short blocks away. I walked there, and found the back side of it was visible from my 15th floor room (the orange traffic signs are alongside AWC in the photo – click to enlarge). 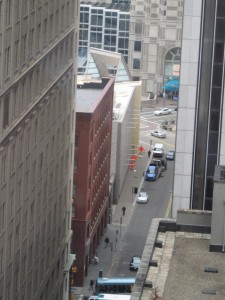 August Wilson?
If you don’t know who he is, note the Center website link above. There is plenty of information. He is one of America’s most noted playwrights, one of the very few winners of two Pulitzer Prizes for his plays; the only African-American playwright ever to have two of his plays performed simultaneously on Broadway.
I met him when he was, literally, a “nobody”, like me…. 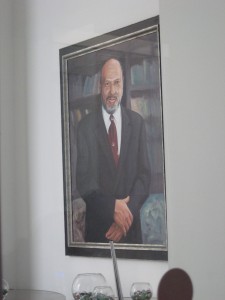 Best as I can figure, it was sometime in 1979-82 time period when I met him, briefly, when he was a part-time cook at Little Brothers in Minneapolis MN. I was a sometime volunteer there, and August was the cook. Laura, my friend who introduced me to Little Brothers and got to know August better than I, says he was an outstanding cook, and I’ll take her word for that. My specialty is eating! She spent more time than I at Little Brothers; I was more part of the Catholic Charities circle in those years.
But I did meet August.
Later, I saw eight of the ten plays in his Pittsburgh Cycle – the plays that led to his fame. All of these were produced locally at St. Paul’s Penumbra Theatre. Gradually, I came to know that the playwright August Wilson was the same August Wilson who I’d met as a cook at Little Brothers some years earlier.
In April, 1998, my daughter and I visited Pittsburgh and were privileged to be given a tour of Augusts Hill District by his older sister, Freda, including going into the tiny home in which they grew up. (In the photo it is the last building on the right, and it is now a historic site in Pittsburgh at 1727 Bedford Ave. Its backyard was the setting, August said, for his play “Seven Guitars”. Note the skyline of downtown Pittsburgh in the background. Indeed, the Hill District is on a hill overlooking downtown. 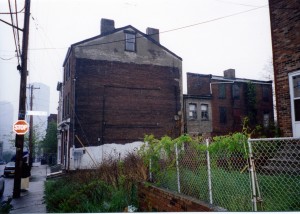 Freda remembers her younger brother as always being serious. It was not an easy road for he, his siblings or any persons of color in his growing up years. He wrote a paper in school, and it was so good he was accused of plagiarizing it, and dropped out. No one seemed much interested in his re-enrolling. Ultimately, he received an honorary high school diploma from one of Pittsburgh’s Carnegie Libraries, which is where he delved deeply into history, particularly African-American. He wrote, and wrote, and wrote.
My friend, Laura, remembers August as very modest and humble. When he won his first Pulitzer (1987), Laura recalls him as being excited to be able to take pictures of the famous people he would see there, not much aware of his own fame…that, in fact, he was now famous, too.
At the conference I attended in Pittsburgh, I invited August’s sister to speak to the 200 retired National Education Association educators in attendance, and publicize the new Guidebook (it is excellent) which has been published about August Wilson’s Pittsburgh. Here is the flier she distributed: August Wilson book flier. Her picture is below: 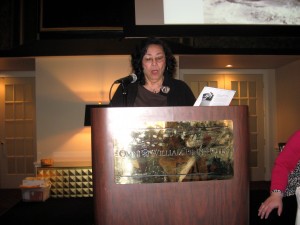 As for me, I’m working to learn more about how Little Brothers in Minneapolis assisted in August Wilson’s career development, and to help get Little Brothers recognized as well. As best I know, he completed at least one of his plays while there, and refined one or more of his “Pittsburgh Cycle” in his two or three years there. Yet Little Brothers merits hardly a sentence in any descriptor of August Wilson. Minneapolis’ Little Brothers is a very important part of his ‘roots’.
We all have our heroes and sheroes: August Wilson, and Freda, too, are among mine. I’m so happy we crossed paths….
https://thoughtstowardsabetterworld.org/wp-content/uploads/2022/04/thoughts-300x138-1.jpg 0 0 dickbernard https://thoughtstowardsabetterworld.org/wp-content/uploads/2022/04/thoughts-300x138-1.jpg dickbernard2011-03-31 09:36:552011-03-31 09:36:55#352 – Dick Bernard: August Wilson: the Triumph of an Ordinary Man….