There was a bit of synchronicity at work for me a few days ago.
It began with conversation with Brett, one of the staff at City Centre Caribou Coffee in Woodbury. Apollo 11 had come up as a trivia question, and I noted my memories of that astonishing July 20 in 1969: of stopping along U.S. #2 west of Bagley MN, glued to the car radio, during the time when Apollo 11 touched down on the moon; and many hours later, back in suburban Minneapolis, watching the astronauts on the moons surface on television.
Brett, it turned out, was 8 years old and growing up in Bemidji that day in 1969. I knew I had some really rough photos I had taken of Apollo on the moon that night. They wouldn’t rate star quality – snapshot camera, slow film and low light weren’t a good combination – but I said I’d see if I could find them and make a copy for him.
It took a bit of looking, but I found the slides. Here’s one of them (click on it to enlarge). As I say, the quality is very poor. There are more photos at the end of this post, and of course a selection of much better photography easily accessible on-line at YouTube and other places. 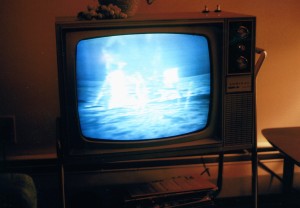 It happened, almost the same day Brett and I had our conversation, that daughter Heather made a request to see the new movie, the Muppets. Frankly, I hadn’t heard of the movie, but I said “sure”, so last Wednesday, I picked her up at Proact in Eagan, and went to the Muppet movie at the Woodbury 10. Just enter zip code to find theaters and show times in your area.
Of course, I remembered the Muppets from parenting days. Coincidentally, they first appeared on Sesame Street in 1969, the same year as the moon landing, and were Sesame Street staples until 1976, when they spun off as a separate Muppet show.
We went to the Muppet movie and it was great fun. The receptionist at Proact said the movie was corny, and for sure it was, but if you want to refresh from the tasks of last minute Christmas shopping, and get back in the Christmas spirit give yourself a gift and drop in on the Muppets movie. You’ll leave feeling good.
It is delightful.
Here are some other Apollo 11 era snapshots I found (click to enlarge). 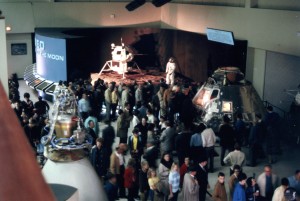 Viewing the return capsule and a full-size replica of the LEM at Manned Space Craft Center Houston TX Nov. 1969 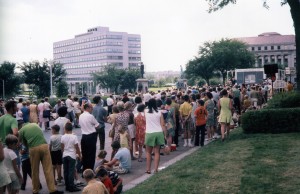 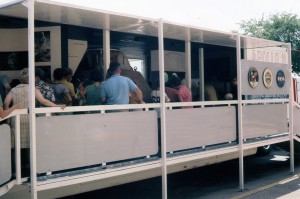