Pearl Harbor Day I posted a piece about my Uncle Frank and his service and death on the USS Arizona at Pearl Harbor, December 7, 1941.
The day went on and late in the afternoon came an e-mail from a name I’d never heard before. The e-mail included two photos of my Uncle Frank in Long Beach CA on November 10, 1938. The writer of the e-mail identified himself as the son of the man, Max Calvert, who was posing with Uncle Frank in the photo. His Dad, Dave said, was then the secretary for Admiral Kimmel on-board the USS San Francisco. Kimmel was at that time commander of the Pacific fleet and professionally suffered in the aftermath of Pearl Harbor.
I have my pictures fairly well organized, so I took out the package labeled “Frank Bernard” to see if there were any matches. You can see the results for yourself, below.
The first photo of each pair is from Dave Calvert; the second is from my family file. 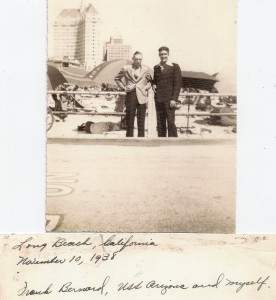 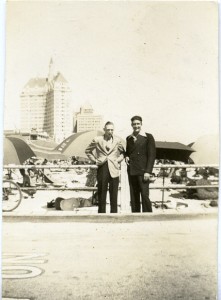 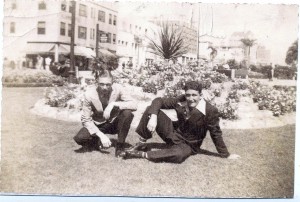 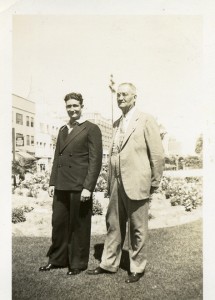 Same setting, Frank with his Dad Henry Bernard, from the Bernard album

Again, the first photo is from the Calvert album, the second from the Bernard album, third, Calvert, fourth, Bernard.
Before December 7, 2010, Dave Calvert, a Californian, and I had never heard of each other.
How did Dave find me? He had the pictures, and he knew that Frank was a casualty on the Arizona, and on this particular Pearl Harbor Day he decided to see if he could find any evidence of family of this long ago sailor who was friends with his sailor Dad in 1938. He did a simple google search and several pages in found reference to my family history website. From there he managed to get ahold of my e-mail address and the rest is history.
The miracle of the internet.
Some days later, he says, he still has ‘goosebumps’ over this essentially chance meeting and our sharing of essentially identical photographs from 72 years ago. I share his sentiments exactly.
I couldn’t label that photograph with the unknown man though I knew that the picture had been taken in 1938 from a developers mark.
Now, thanks to someone who took the extra step another piece of the family tapestry has been identified.
https://thoughtstowardsabetterworld.org/wp-content/uploads/2022/04/thoughts-300x138-1.jpg 0 0 dickbernard https://thoughtstowardsabetterworld.org/wp-content/uploads/2022/04/thoughts-300x138-1.jpg dickbernard2010-12-09 22:24:322010-12-09 22:24:32#294 – Dick Bernard: Naming a mystery man in a photograph, 72 years later.