PRE-NOTE: My choice in reflecting on talk such as described below is to never attempt to interpret the expert. So, after the talk, I asked Dr. Tonoyan if he had “any recommended available sources of further information I could share with my list?” He responded almost in short order: The best and the most level-headed analysis on the conflict is done by a good friend of mine from Baylor Serhiy Kudelia. You cannot get anything better at the moment. His articles appear here.”
A reflection on US (as in “we, the people” of the United States.)
Thursday evening a dozen of us gathered to hear Dr. Artyom Tonoyan speak on the topic of “The Hitchhikers Guide to the Russian-Ukrainian Conflict: Causes and Consequences.”
I sent around the flier to my own mailing list, saying “This promises to be a very interesting program. Stop over.” Of course, I didn’t know if it would be “interesting”. It’s common to pre-conceive: “What does HE know?” This is a regrettable pre-judgement we often make about this-and-that. You can’t know if you’re right or wrong till you actually show up.
I’m very happy I showed up. The evening was extraordinarily rich in information and food for thought.
(click to enlarge) 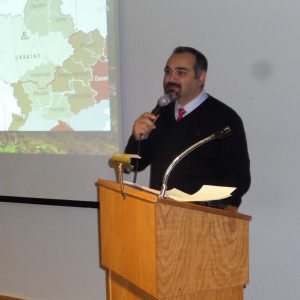 We came, and a couple of hours later we left, my sense: all of us were well satisfied. I knew about half of the folks in the room, and they, and me, and the others, were riveted on the account of this Armenian native, with family in the Russian east of the former Soviet Union country of Ukraine. A hook for me to attend, frankly, was that airliner that went down over eastern Ukraine some months ago. I asked him to show the approximately location on the map he had projected. It was in the north part of the Donetsk region, the dark brown (most heavily Russian) of the eastern provinces. That was Dr. Artoyan’s only mention of the plane.
I go to sessions like last nights quite often. As with this one, I always take a pass on trying to do a review of what the speaker had to say – it is an impossible task to accurately do soundbites about, as in this case, hundreds of years of local and regional history, and multiple players . Suffice, that the situation in Ukraine – a country Dr. Tonoyan described as about the size of Texas – is exceedingly complex*.
In our country we tend to boil down “complexity” into headlines, or one or two minute summaries on the evening news, with content chosen by editors who can include or exclude anything that they wish, including whether to even mention a national or international happening. You don’t get depth by 144 character twitter feeds, etc. But that is how we seem to make many of our judgments as people.
As it happened, just a few hours before the meeting I had sent a handwritten letter (my choice of style when I’m serious about something) to Scott Pelley of CBS Evening News and CBS’ Sixty Minutes. It was a simple one page letter, and I raised a complaint about CBS news-editing, in particular the tendency I’d seen on his news program to use judgement laden words to describe certain people or situations. What led to the letter was his recent reference to “Obamacare”, as opposed to Affordable Care Act. Or almost casual labels like “terrorist” and “dictator” to refer to some vague “them” in a piece of news footage. Decisions like what words are used are decisions deliberately made.
But it takes time to be informed, and most of us don’t take the time to get informed; and worse, we make snap judgements based on someone elses analysis.
We left the meeting room last night much better informed than when we came. Dr. Tonoyan helped fill in the blanks of this regional crisis.
There are many legitimate sides to every story. We know this from our own lives. “Truth” can be an uncertain commodity, very hard to find.
The Ukraine, Russia and US is very, very – much more than how do Putin and Obama look at each other when the cameras are running.
We can’t be well informed about everything. Best we (US) can do is to avoid falling into the trap of judging the entirety by a fragment.
The program I attended is part of the Third Thursday Series of the Citizens for Global Solutions MN. I’m a member of the Board of that group. I encourage your participation.
Thank you, Dr. Tonoyan. 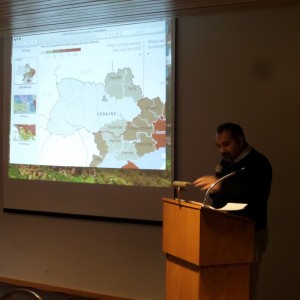